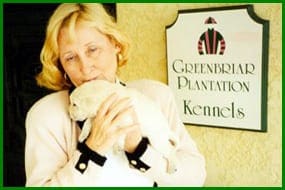 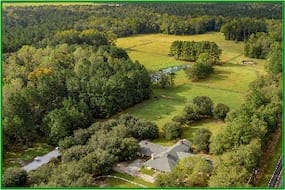 It has become pretty common knowledge that English labs come in three key colors: black, chocolate, and yellow. The yellow variety can range from a pale cream to a rich deep golden color. However, most yellow English Labs tend to be a paler yellow or cream. Greenbriar Plantation offers both yellow lap puppies for sale, and black English lab puppies, too.

Thankfully, English Labs are not high maintenance where grooming is concerned. These active dogs can tend to get themselves in anything from dirt to mud. The good thing is that they have a thick, dirt-resistant coat, so this helps a lot with overall grooming. For Labs, you will mostly need to bathe them when they begin to have a smell or after they get themselves into a murky play situation. Obviously, you can control how often they need baths by what you let them get into or not. But overall, it’s best to bathe them at least once every few months. It is also best to use a grooming brush to make that lovely coat shine and to keep tangles out. They will love you for the massage they get when you do this. English Labs, like all Labs, shed often. You will need to have a plan to manage this in your home. We can help.

Dogs exhibited at dog shows are judged against that breed standard, so you would assume that any divergence would be on the part of the working dog lines. However, in reality breed standards are open to interpretation. And because of that, there have been changes on both sides of the American Lab and English Lab divide. Show dogs have become more heavily built, whereas working dogs have become more “racy.” We’ve also seen show dog heads becoming bigger with looser skin. On the other hand, working dogs have lost their wonderful otter tails, and in some cases their double coats too. Greenbriar focuses only on the English Lab.

Around the world, the Labrador Retriever has been split into two different types of Labradors. One branch of Labradors has been developed into a strain of amazing family pets that has still kept many of the qualities of the working dog. The other has been developed into a strain of incredible, athletic, hunting companions. This split in the breed has not only happened in the US, it has also happened in many other areas of the world. Greenbriar focuses on one side of that split—the English Lab. But we have bred our dogs to have all of the qualities any Labrador Retriever is celebrated for.

Why Did Labradors Split into English and American Labs?

Dogs typically produce a litter each year. As such, it doesn’t take long for the effects of selective breeding to show. In the second half of the twentieth century, exhibiting dogs in the Labrador Retriever breed became increasingly popular. So, for the first time in history, multiple Labrador generations never required to work as actual retrievers were bred.

Over time when dogs are bred for the show ring, exaggerations in type begin to occur. A certain look becomes what the breeders are striving for and breeders select their dogs for that look. This is how heavier bodies, bigger heads, and shorter legs quickly became established for the English Lab side of the Labrador breed. At the same time, those working their dogs were increasingly breeding not just hunting companions, but dogs aimed at succeeding in competitions known as field trials.

In both the US and the UK, the field trial community is the main breeding pool for Labradors. Here, breeders’ dogs compete for the coveted title of Field Trial Champion. These titles enables the breeder to earn stud fees for breeding their champion dogs. In field trials, speed and drive are rewarded, less than the steadiness and endurance of old. Overall, dogs are often rewarded for special skills—appearance counts for little. Thus, American labs were selected for their retrieving and marking skills and for their athleticism and speed. Appearance was not the focus as the American strain of the breed evolved.

One would think that this evolution would take a lot of time, but it actually happened over a relatively short time in history. The separation of the breed was almost complete within five decades. That being said, not all Labradors today are an extreme example of one type or another.

By 1860 Beaufort was one of the wealthiest towns in America and a center of the secession movement, led by Beaufort native Robert Barnwell Rhett, the “Father of Secession” in South Carolina. However, during the Civil War, Beaufort was the first southern city conquered by Union forces after a U.S. Navy victory in Port Royal Sound on in 1861. The port was a valuable asset, and Beaufort became the headquarters of the U.S. Army, Department of the South. Most of the buildings were converted into hospitals for wounded Union army soldiers. At the end of the war, a National Cemetery was laid out north of Boundary Street as a burial place for Civil War casualties.

Soon after, Beaufort became a leading center for the Reconstruction regime in South Carolina. Beaufort’s military governor, Major Saxton, directed the U.S. Bureau of Refugees, Freedmen and Abandoned Lands in South Carolina. Beaufort also became the site of the first Freedmen’s Bank in the state. A leading political figure of the Reconstruction era was Robert Smalls. He was a Beaufort native and former slave. Smalls organized the Republican Party in Beaufort in 1866 and served in the state legislature and U.S. Congress between 1868 and 1887. He authored the public school provision of the constitution of 1868. He also founded the Beaufort School District One, which established the town’s first public school in 1868.

From 1870 to 1893 Beaufort prospered as a commercial and industrial center. The area actually became led by transplanted northern or immigrant merchants and capitalists. Cotton, timber,

phosphate mining, and shipping all transformed Beaufort from the old model before the war to the New South model after the war. However, a series of natural disasters and economic changes caused a rapid reversal of fortunes. In 1893 a hurricane demolished the town and flooded neighboring Sea Islands. This caused the phosphate industry to migrate to Florida shortly thereafter. The last commercial rice crop was produced on the Combahee River in 1914. The world decline in cotton prices ended Beaufort’s historic crop by 1919. Add to this, in 1907 an accidental fire burned down much of the central business district. These events combined and caused a long economic decline in the area that hit bottom during the Depression of the 1930s.

During the 1920s the old cotton docks and warehouses along the Bay Street waterfront were converted. They found a new use by the new gasoline powered shrimp trawlers that had moved up from Florida. Some of the old cotton fields were converted to vegetable farming. Many of the old rice fields were converted to hunting preserves. Great for Labrador Retriever owners, we might add! None of these new businesses provided more than a fraction of what the old cotton, phosphate, and timber industries had provided. This meant that overall Beaufort declined as a commercial center.

During World War II, Beaufort began to revive. This was helped by the economy boost provided by the U.S. Marine Corps Recruit Depot on Parris Island, established in 1915, and the U.S. Naval Air Station, which opened in 1943. With the establishment of a naval hospital at Beaufort in 1949, the military’s impact on the town’s economy increased. Since then, Beaufort has grown steadily. In the twentieth century the Old South charm of Beaufort attracted not only visitors and retirees but also Hollywood movie producers. Popular movies such as The Great Santini,The Big Chill, Prince of Tides, Forces of Nature, and the Oscar winner Forrest Gump were all filmed in Beaufort, adding to the prospering local economy.

Like all pedigree dog breeds, the Labrador Retriever can have its fair share of genetic diseases. Many of these inherited conditions can be avoided by choosing puppies from health tested parents and from great breeders. Some breeders will guarantee their dogs for things that they are commonly known for. Greenbriar Plantation, for instance, guarantees the hips and elbows on all of its dogs.

Some other health troubles may affect English Labs and Labs in general. These are all things you can prevent with regular medical check-ups. At the very least, by being aware of these possible issues you can be on the lookout and catch any of them early if they were to occur with your dog. No breed is free from medical issues, and Labs are actually one of the breeds that suffers the least from inherent health issues.

The most common health issues with English Labradors include: • Joint issues: English Labs can experience joint dislocations or hip dysplasia • Eye troubles: they can suffer with cataracts and issues with their retinas • Cancer: all breeds can be affected by this • Diabetes: Labradors can develop diabetes but if they do it can be managed with proper care and they can live long healthy lives.

If your English Labrador becomes overweight, it usually isn’t because they have inherited an obesity gene or are lazy. It is more likely that your dog might be overeating because they are being overfed. The English Lab community is accepting of higher weight levels, so this happens. Let’s face it, it’s easier to let your dog get a bit chubby when your friends’ dogs are all overweight. However, studies have shown that the single most important thing to keep your dog well and give him a long and happy life is avoiding obesity in your Lab.

Is an English Lab the Right Dog for Me?

Both the American and English Lab types share many features. For starters, they both start out big and bouncy when they are young. And like all Labs they are very sociable and don’t like to be left alone for hours. If you have a full-time job and nobody will be home during the day when raising your puppy, we can give you some specific advice that will help in that situation.

Before you think about what type of Labrador is right for you, you must keep some things in mind. Do your homework and then decide. When you are confident that you want a lab, then you can decide whether an English Lab is the right dog for you. If you just want a relaxed family pet, or the appearance of your dog is important to you, then an English Lab may be a simpler choice than a Lab from working lines.

English Labs make great family pets. Some breeders are trying to bring classic Labrador features back into their working lines, but an English Lab is your best bet for this. If appearance is less of a big deal, you may not want an English. However, for active people who intend to walk and train their dog extensively, either American or English Labs will suit you. One of the reasons Greenbriar Plantation breeds English Labs is because they offer the things people like about both American and English versions of the breed. And they make great family pets!

Please visit our kennel page for information about available puppies or upcoming litters.

We look forward to meeting you, speaking with you personally…. and we invite you to visit to see how our dogs are kept and our puppies are whelped. When you choose a puppy we will give you a helpful introduction to housebreaking and training so you get off to a great start with your new companion. We like to say our puppies are 90% housebroken when they leave Greenbriar.